After the first night in Trieste (see the previous article), we choose to do a short step around the small villages of Slovenian coast. Slovenia only has 47km of coast, so it is often ignored by travellers who are searching the good sea and who, usually, simply cross it to enjoy the huge choice offered by the next Croatia.

From Trieste, in around one hour, the bus leaves us in Portoroz: the farthest of coastal centers – near to Croatian borderline – famous not for the beaches or for the architecture, but for casinos, so much to be considered a kind of Adriatic Montecarlo. 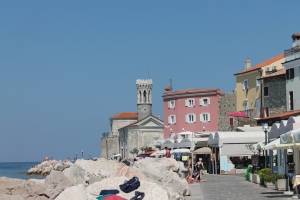 A long but nice walk on the promenade make us to reach Piran, that occupies the adjacent promontory. Its historical center is considered one of the most characteristic of the Nation. In effect, this thin strip of land surrounded by the sea, where a small tower and a belfry in Venetian style stand out among the red roofs, risults very suggestive. The small town is very nice and we willingly walk around, but the heat becomes increasingly sweltering and we decide to have a swim. The whole small promontory is surrounded by a very thin beach made of small stones, where the bathers can feel good in the shallow clean water in front of the nice village center.

After a regenerating swim and a lunch of real summer travelers – a melon keeped between rocks in the sea water (effect fridge guaranteed) – we take a bus to Izola, going a bit nearer to Italy. The architectural style of the village is similar to the previous one and also here you can notice the influence of Venice domination. We spend here only the time to have a walk and a huge icecream, because we have just decided to reach Koper by walk.

A cycle lane along the sea  – used more by scooters (without helmet) than by bikes – links the two towns. A really strange man, wearing tatters and with patches on his hands, is making a very big rock to roll on the sidewalk, under the 40°C of the early afternoon of august. Surpassed the weird character, we walk th cycle lane and in one hour and a half of slow walking we arrive to the capital city of Slovenian Istria.

A bit bigger, but also less actractive, of the previous ones, the small border city is more relevant for the big port than for the turism. In any case the center is pretty, very similar to the other ones just visited. It is the right moment to write some postcards to who is traveling with us in our heart.