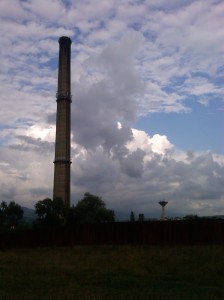 The chimney of the old chemical factory acts as a sentinel to the city, as a bleak lighthouse that from the hill indicates the presence of the place which was the first capital of Romania, and which is now considered a little bit more than a village.

Andrei guides me safely, riding his bike, avoiding the cows that peacefully graze here on the sidewalks and the stray dogs that, tired and hungry, roam on the roads. Here, climb up to the lawn! There, down that road, we can arrive at my grandparents’ farm. But we can arrive there only by the long road, the shortest one is dangerous: too many biting dogs.

By the roadside two donkeys are resting, still harnessed to their cart. Gypsies are those who travel with the carts. In Italy do they? He is fourteen but he speaks a fluent english and his eyes are awake and interested, able to look around and eager to learn something about the world existing out of Arges region. He is sincerely amazed to learn that in Italy it is hard to find stray dogs on the street and he comments with a reflexive It is very good. They are dangerous, they often bite people. Reflecting on why the State doesn’t address the problem, we don’t find an answer since we notice that the State itself struggles to take care of its citizens, still in recovery from the trauma of communism.

The grey buildings, all identical and all anonymous, stand as a reminder to those who live here the difficulties of the regime, during which personal identity and the possibility to express one’s self were reduced to the minimum. But Andrei has in his eyes the joy that his parents have been able to give him. He watches the horizon and he doesn’t see the grey of cement, but instead, the violet of the little flowers that step by step make their way between the stones giving colour to the hill.

One thought on “The violet flowers of Campulung”